What I learned from a horse named Frank

When I lived in Salt Spring Island, I tried equine therapy.  I have always loved horses, and through coaching, I heard that horses were masterful at helping people grow and become more self-aware.  Horses are highly psychic and intuitive, and tend to reflect energy.   If you are confident or unsure, a horse is sure to let you know.  As mirrors to an individual’s inner state, people will often train with them for therapeutic reasons, or to help them become better leaders. 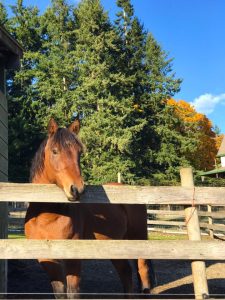 The first time I came to the Lavender horse farm, I met Jacqueline, the equine therapist.  She acted as a guide and walked me through the process.  The whole experience was a kind of shamanic journey, where you entered “the field” and interacted with the horse as a guide and reflector.  When Jacqueline and I walked down to the horse farm, she said that a horse would be the one to pick me.

Within a minute of walking down to the barn, I saw Frank, a large horse, walking across the field.  I felt tears in my eyes, almost as if I knew something big was going to happen, and that Frank was going to help me.  He turned around, walked toward me, and we stared at each other for about 60 seconds.  It was intense.  I’m not sure if I breathed.  His eyes were eternal and knowing.  Shortly after, Jacqueline said, “well, I guess that was pretty obvious.”

She said that Frank is a leader and had a rebellious nature.  Then she turned toward me, “are you anything like that?”  I stood there awkwardly, still nervous to work with a big horse.  She handed me the bridle and said, “here, put this on him.”  Surprised to suddenly have a big task,  I walked over to Frank and saw him eating grass from the ground.  He was huge and intimidating.  I pulled his neck up with all my might, afraid he would try to bite me.  Frank didn’t budge.

Jacqueline exclaimed, “he knows he’s boss right now. Look how you stepped outta the way to let him eat.  Show him who’s boss!  Who are you, look at the way you are being with him!”  I was stunned and feeling a little annoyed by the way she called me out.  “Hmm.. this is harder than I thought it would be ..” I thought to myself.  To which I mustered up all my energy and courage.  I consciously opened my inner self to Frank.  Then I looked at him, and said to him silently, “look, this is who I am and this bridle is going on.”  He immediately responded by lifting his head and submitting.  Jacqueline gleefully said, “Wow, unbelievable.  See, that’s what happens when you shift your energy.”

Afterwards, we entered the ring, the “sacred circle” together.  Jacqueline asked me if I had any life questions I wanted to ask Frank.  I said, “yes, my next life steps.”  Then she guided me to kneel down in the middle of the circle, and notice how Frank would respond as I put my intention out into the universe.

At first, he turned the other direction, and slowly he started his way toward me.  Then Jacqueline said, “walk Frank around the circle.”  I pulled on his harness to which a small lead was attached.  At first, he tried to eat foliage and things around the ring.  Then he wouldn’t move.  I was feeling flustered and dismissed.  Feelings of inadequacy came over me.  Jacqueline said, “do you feel stuck, Sura?” expressing the stuckness I felt in my own life.  “Well, yea”  I said flatly. “Well, what do you do when you want something?”  I shrugged my shoulders.  “Give it my all..?”  To which she said, “then go ahead! Give it your all!”

It sounds crazy, but I backed up about 7 feet and slammed my whole body up against the side of Frank’s body and said, “MOVE FRANK! MOOOOVVVEEEE!  MOVE NOW!”  I body slammed him, hard.  And boy, he sure moved.  It got him started.  I pulled his lead, and ran him around the circle.  Jacqueline laughed out loud, “there you go girl! There you go! You have to show him what you really want!”   After a few minutes of running as fast as we could together, Jacqueline unexpectedly yelled, “Now make him stop!”   An inner panic came over me.  How could I make this huge horse stop?  But somehow it happened.. and after that point, Frank and I were on the same psychic wavelength.

He and I eventually got to a place where he could receive my commands without any touch or vocal command, simply by a thought and intention.   If I thought, “now let’s walk,” Frank would start walking, and if I said, “we’ll stop at the pole,”  I would make my own energy stop, and he would immediately stop.  We were completely attuned and connected.  I could lead him with barely a finger touch and have him run next to me without holding onto his lead.  It was beyond anything I had ever experienced.  Frank, the amazing horse, completely intuited my thoughts and feelings.

That day was a big day for me.  I had never felt so “embodied” in my life.  I could feel being in my core like I had never been before. It was as if I was only partially inhabiting my body before the day I met Frank.  Being with Frank felt like an initiation.  The only way he would listen to me is if I was deeply true and authentic – and fully embodied. I felt a tremendous amount of energy surging through me, and by the end of the session, I felt overwhelmed with gratitude. From that day forward, I related to animals differently and with greater respect, knowing that they could read and understand my energy, and that I could connect with them in other ways, rather than just physically.  Jacqueline reminded me that horses simply reflect energy, the way the universe reflects our energy.  So now when things go my way, or don’t go my way, I always look at myself and what kind of energy I’m putting out into the universe.

Thank you, Frank, for the reminder and initiation.