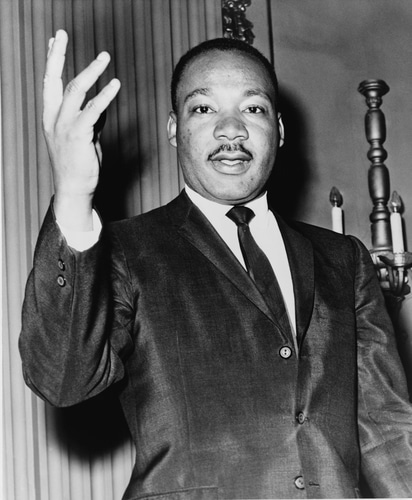 Friends, to honor Martin Luther King today, I wanted to share one of the most inspiring stories I know about King, one that many people do not know about.  It is a story about a time when King faced his greatest fear.

King’s rise to leadership was completely unexpected.  It was Dec of 1955.  He was nominated to lead the Montgomery bus boycott just a few days after Rosa Parks refused to give her seat up to a white man.  A young 26 yr old pastor, King never anticipated leading such a movement.  He said, it “happened so quickly that I did not have time to think it through. It is probable that if I had, I would have declined the nomination.”  Shortly after King accepted the nomination, chaos, tension and conflict ensued.  He was thrown in jail for a minor traffic violation, there was internal conflict within the black community, and King received numerous death threats, about 30-40 death a day.  He said:  “I almost broke down under the continual battering.”

During that time, King was deeply aware of his own fear and vulnerability in the manner, not to mention, he had a 10-week old daughter at home.  On Jan 27th, 1956, he hit an absolute rock bottom when he received a particularly threatening death threat, which King describes as a  “saturation point.”  His courage was gone.  He sat down at midnight in front of an untouched cup of coffee, exhausted, and began to think about ways that he could get out of leading the movement without seeming like a coward.

He began to pray outloud, “”Lord, I am here taking a stand for what I believe is right. But now I am afraid. The people are looking to me for leadership, and if I stand before them without strength and courage, they too will falter. I am at the end of my powers. I have nothing left. I’ve come to the point where I can’t face it alone.”

He sat silently.  King said that in that moment, he experienced the divine like he had never experienced Him before.  He heard an inner voice say, “King stand up for justice.”   It was in that moment, that King knew that God was with him, and that he was going to lead the civil rights movement.  3 days later, his house was bombed. No one was hurt.

King describes this experience as one of his most revelatory spiritual experiences.  He experienced great doubt and fear, but did not let it overcome him.  Hitting rock bottom deepened his spiritual faith and understanding, and gave him the strength to lead with courage.  He never took credit for the civil rights movement.  King later said that he knew the movement was beyond any one person, and that he “just happened to be there.”  He is an iconic leader who fought for freedom peacefully without much regard to his own personal safety.  King lives on in our hearts as one of the greatest leaders of our time.

Prev4 Obstacles To Fulfilling Your Dream
Living on the BeachNext